Kangerlussuaq / Sondre Stromfjord airport (BGSF) is the main hub for Air Greenland and by far the most accessible airport in Greenland. Sondre Stromfjord was a US military base during World War II (Bluie West-8), forming part of the Crimson route, and again during much of the Cold War.

BGSF has a long runway, localizer/DME approach and a control tower. Sondre Stromfjord is located a bit inland, meaning the weather there is generally better (less bad) than at Greenland's coastal airports. There's an excellent weather / flight planning station at Sondre Stromfjord airport and a cafeteria in the main airport terminal. Jet fuel as well as avgas (100LL) are normally available. 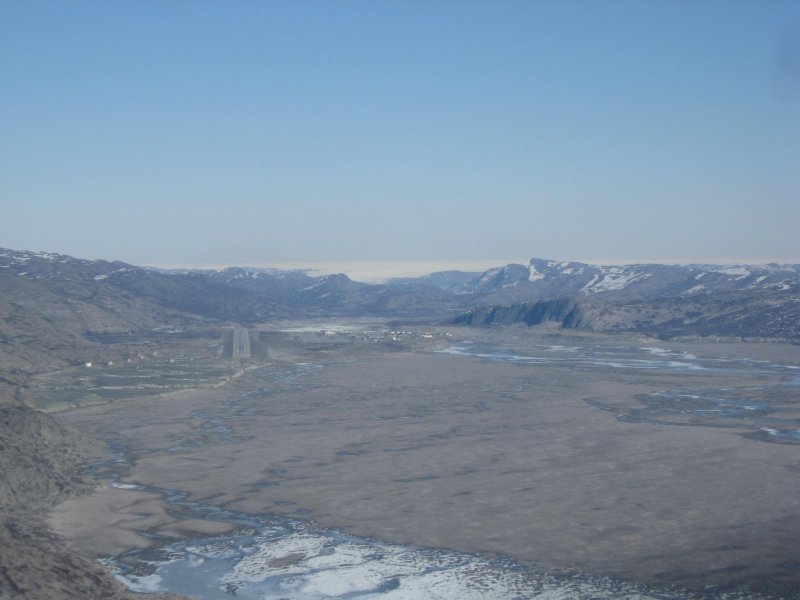 On final for runway 09 at Sondre Stromfjord airport, Greenland (BGSF)

BGSF is the main stopover on the "far northern" Atlantic ferry flight route. This is the route I prefer to fly on Atlantic ferry flights in single engine airplanes. No ferry tank is required in most airplanes, and HF radio is also not required. You stay close to airports at all times and can maintain VHF radio contact practically the entire way.

Along this "far northern" Atlantic ferry flight route, the longest distance between airports is 520 nm direct (not counting Vagar). However, because there are essentially no alternate airports on the East Coast of Greenland, you need about 750-800 nm. range to cross the Atlantic safely without ferry tanks. You do need to be able to climb above the Greenland icecap, minimum 12,000 feet on a calm day. If you can't achieve a safe altitude over the icecap, you can always fly BGSF - BGBW - BGKK around the southern tip of Greenland, and sort of take the scenic route so to speak :)

Like all Greenland airports, Sondre Stromfjord is open limited hours (8:30 - 16:45 local last I checked) and closed on Sundays. If you're willing to pay the overtime charges, they will open the airport up for you after hours, but I believe this is rather expensive.

Information on these pages is from my own experience as a ferry pilot on various ferry flights. It is general in nature and neither official nor intended for flight planning. If you notice any discrepancies or would like to add anything, please email me at ward DOT welvaert AT gmail DOT com.

(c) 2002 - 2010 Hayley International Inc. --- All trademarks used are the property of their respective owners.